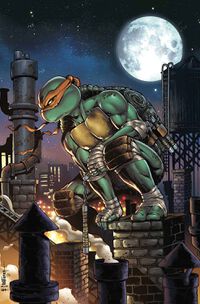 Michelangelo (or Mike or Mikey) is one of the Teenage Mutant Ninja Turtles (TMNT). His bandanna is orange (originally red) and his weapons are traditionally kobu nunchaku. However because nunchucks, as they're normally called, are illegal in many places, TV creators have also portrayed him using other weapons like grappling hooks and tonfas. He is named after Michelangelo Buonarroti, the famous Renaissance sculptor, architect, painter, and poet. Michelangelo is the most wellknown of the Turtles because of his kid-friendly attitude. Known as "the party dude" of the group, he is the one who coined most of the Turtles catchphrases. Because Kevin Eastman's original "ninja turtle" concept drawing in 1983 portrayed an unnamed turtle with nunchuku strapped to its arms, some consider Michelangelo to be the first Ninja Turtle created.