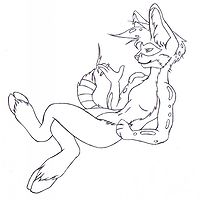 Mianame is an anthro artist from Florida, U.S.A. She represents herself as a serval-satyr hybrid. She is also known as Mirches on deviantART and servalsatyr on LiveJournal

Mianame is a female serval-satyr hybrid with no specified age. Her looks often change such as ear size, whether she has horns or hair or not and other small nuances. Her top half is very like a serval's including spots, stripes, and tail. Her bottom half's fur is brown and looks like goat legs. She also has a raccoon mask.

Her coat color changes for seasons. Yellow with green markings for summer, red with yellow markings for winter. Her underbelly changes shades of tan.

Mianame was born September 30th, 1987. She goes to college, works on the side, and has yet to choose a degree.

Art is a side project for her. She only recently began commissions and mainly sticks with doing things when and how she feels like. Digital and traditional black and white are her two favorites. 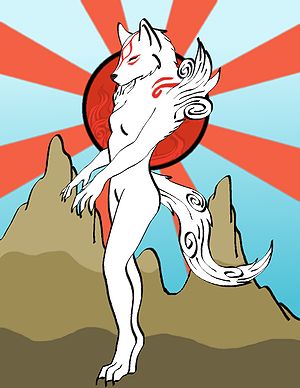 She also has completed one fursuit and has many plans for more to come.

Mianame recently began taking small commissions for fursuits. The link to her web page is listed below.