Food was provided at breakfast, lunch and dinner. Bread and cereal was provided for breakfast and lunch. Dinner was prepared by two teams: 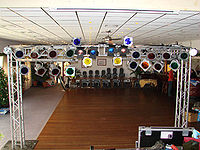 Enlightening was done by Nikoshi, who arranged an truss which supported 4 fourbars, each with 4 par56 longnose, 4 par56 shortnose, 4 fresnellen with barndoors, 2 stobes, 2 sharks, 3 sunstrips that where placed on the stage and 2 par shortnose for the backlight for the actors. The lights where controlled by a 24 channal Minim light table and dimmed with 3 x 6 channel dimmmer-packs from CLS. As a light engineer Nikoshi did most of the set-up and break-down work, but was aided by: Storm, o kill and Panzardragon

Picture of Nekotorisha igniting the milk can.

Carbide shooting: an small amount of carbide is put in the milk can. Then water is added into the milk can to cause a chemic reaction with the carbide creating an synthetic gas called acetylene which is unstable and highly flammable. The top of the can is sealed by an plastic bag and a strap. The can is placed stable on its side and the gas gets ignited with a torch trough the small hole in the bottom of the can. The result: the ignition of the gas creates high pressure causing the plastic to rip or blown off with a loud bang!

External links to videos of the carbide shooting:

The local PA system present at Het wapen van Holland. Was used at the pawpet show and to play music. On the 31 of December DJ Kenai did the music in the evening. 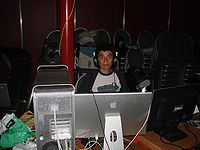 Picture of KwisA operating the stream.

This MewYear KwisA brought his mac pro to encode the stream. o kill provided an dedicated server with 4 cpus and 2 gb of memory from Yerf-IT to broadcast the stream. Together they set-up the stream and KwisA and DukeFawks looked after the stream and kept it running.

An pawpet show was held at MewYear 2, organised by o kill. The story; The book of secrets was written by Shay.

People who aided on the show:

Not everything went perfect and as planned. Little accidents occurred like curtains being stuck or operated at the wrong moments (which has been described as hilarious). Eddard the owl had trouble at times finding his way trough the curtain. And because they had only a few hand microphone some difficult situations occurred like puppeteering with two pawpets while missing a third arm to hold the microphone.

But nonetheless the Puppeteers and also the audience had a good time and some laughs, and thus the pawpet show was a small success

The fireworks was mostly taken care of by Nekotorisha the brand was "pro line" he used some additional fuse to link some fireworks together. He was using a big cigar for igniting it oldstyle. Tigerpawz and McPooch also brought some beautiful rockets from unknown brand.

The organizer of the event is Tjikko, but his friends help out making MewYear to what it is now.