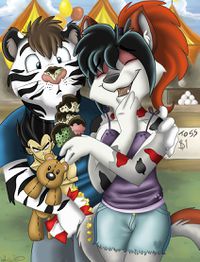 Mestopho (born 1985) is a furry from Fort Smith, Arkansas.

Mestopho is a very lively and rambunctious anthropomorphic calico. She based the character on her personality, and her own personal look on herself. She constantly finds herself diving head first into activity, as she does in her real life. Mestopho surrounds herself with friends and family, as well as Batman.

Mestopho was listed as "Programming Lead" for Waystation FurCon, a convention proposed for 2013 in Illinois, U.S.A.[1]

Mestopho mostly shies off the main furry websites, but can be found on Tumblr and Furaffinity as Mestopho.

Mestopho is the one of the three female administrators of Furry2Furry, and is also the head admin of the site.