Merry is a character in the comic series Andorozon created by Ken Singshow but was also featured in the Extinctioners comic series created by Shawntae Howard. She is a Husky Anthroid. 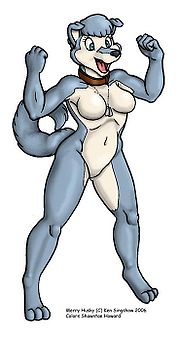 Merry Nogeyama is the Leader of team Andorozon. The Andorzon are bonded by leadership and friendship instead of formal ranks. Merry is the dog of action. She has charisma and even though she's not the brightest, personality alone makes others to want to help her. Since Merry was the first to break Dr. Van Burden's brainwash and liberate others, she became leader by default, which is fine by the others because they really do not want the position.

Merry is strong and noble but she lacks wisdom. She leads with "blind luck" and Charisma. While each of the other Andorozon girls has their own unique special power as well, Merry's is her blind luck. Her ability manifests itself in very odd and irrational ways as she just happens to be in the right place at the right time. 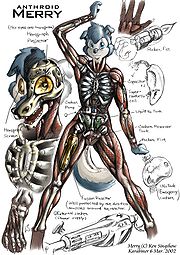 Merry is a very strong Anthroid and even though she is made with inferior current day materials, she is strong enough to throw a small tank. After escaping Dr. Van Burden's grasp Merry brought all her friends to her old home. Haruki, her former young master, was shocked at first but he quickly grew to accept it and is happy Merry is back despite all the trouble she causes. Merry doesn't take her new situation too seriously. She knows that she was dead for some time but that doesn't bother her. She is just glad to be back. While being not too smart is not a strong point, it makes her very adaptable to what others would consider dramatic situations.

Merry, being basically the same mentally as other canines, she likes what all dogs like. Going out for walkies, even though she now can go on walks by herself, she still feels comfortable when Haruki walks with her. She loves playing Frisbee, fetch and eating until she is full. She is simple and loves to live the simple life. She would be her most happy if she could just live with Haruki as his pet forever.