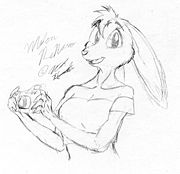 Melon ReNero is the lapine creation of furry artist and writer Aelius.

She began as a minimal character, being the twin sister of his other character Lemon, who stars in Aelius's R-Force series. After being introduced as a character in Joshua The Samurai's close-knit role playing story, Bambi's Bamboo Bar her popularity among the RP'ers quickly grew and Joshua himself admits that she's probably his personal muse now, as he tries to make her a cameo at least once in each of his other written stories.

As a character, Melon is easily described as being cheerful and energetic, always with a smile on her face (or mischievous grin) and is notorious for taking photos no matter where she goes. She gets a kick out of catching her friends in embarrassing situations (never directly caused by herself) and snapping a picture before anyone realizes what happened. She also has a knack for drawing whatever her camera can't get, and she has entire stacks of sketchbooks to prove it. Even so, it's never done out of malicious intent; only for laughs among friends and those involved. 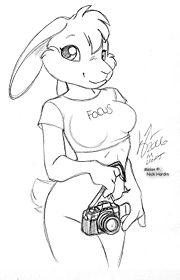 Presently, Melon works as a photographer at Xanadu Studios, a modeling studio in Chicago owned by Andromeda (a hybrid of at least five different species, and another character belonging to Aelius). She shares an apartment with her friends Roxanne Dawson and Alexis (and just recently, Anita), and hangs out with her friends at the Bamboo Bar, which is where the main storyline takes place.

Although Aelius has a personal policy against letting his fursona get romantically involved with his own creations, Joshua The Samurai cleverly set Melon up with Aelius's character in the story and according to the current storyline, she has a secret crush on Aelius (who happens to be too dense to realize it, and in the story actually has his own secret crush on Xanadu model and friend of Melon, Aurelia Wolphex, who in turn has no idea he has a crush on her).