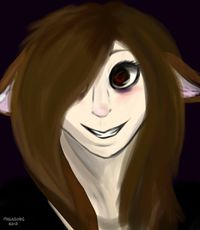 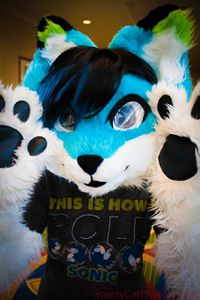 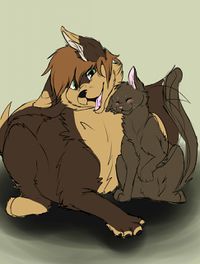 Megasong, also known as Komo.pup and Chalked, is an anthro artist and fursuiter who lives in Pennsylvania, USA.

Megasong's fursona is a demon-cat character with with green eyes with either a demon or cat tail.

Megasong's Panic fursuit, made by Rhul, has silver eyes, in contrast to the fursona, which as green eyes. The costume debuted at Anthrocon 2013.

Megasong has a love for fantasy, animation (which she practices on occasion) cats, and "creepy things" (Creepypastas, horror movies and stories, etc.), She has an for an obsession for musician Brendon Urie, a member of the American rock Panic! At the Disco. She often draws herself with "Panic! At the Disco" shirts and wristbands on.[1]