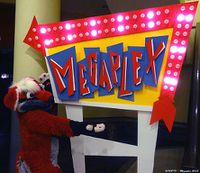 In 2013, Megaplex expanded the pre-convention bowling activities. The convention rented an entire bowling lanes facility exclusively for registered Megaplex attendees. All registered attendees were granted access and allowed to bowl (in or out of fursuit) at no additional charge. Megaplex 2013 also hosted the musical theatrical performance, "Fosgate: Ferret Loan Officer". All attendees were also invited to attend a catered dessert social on Friday afternoon. Desserts served were Key Lime Pie, Cheesecake, and Chocolate Cake with Ice Cream.

Other main stage performances included: The Japanese Game Show Experience, the Megaplex Fursuit Dance Competition, Uncle Kage's Story Hour, The Funday Pawpet Show Live, Fursuit Charades, and a live animal presentation by the C.A.R.E Foundation. Some of the animals present were a 3 month old raccoon, alligators, a maccaw, a cockatoo, a possum, and a capuchin monkey. After the presentation, attendees were welcome to come to the stage to take photographs with the animals.

An attendee meets Brutus the Alligator at Megaplex 2013

As has become traditional with Megaplex, the convention organization donated multiple items to the Charity Auction to help raise money for the C.A.R.E. Foundation. In 2013, the convention donated prints of various posters that were hung in the hallways as part of the convention's theming and decor. The convention also provided one of the popular convention bowling shirts and an autographed print from the Fox Amoore/Rhubarb rock concert. This was in addition to the items donated by various attendees at the convention.

In 2013, Megaplex implemented advertising and promotional videos to introduce the new hotel, and the convention's theme. Guest of Honor Tirrel created an animated music video to the song "You're The One That I Want" and the convention created a hotel intro video using the song "When Will I See You Again?"[5]