From WikiFur, the furry encyclopedia.
(Redirected from Meet the Furries)
Jump to: navigation, search
Culture > Hoaxes > Meet the "Furries" 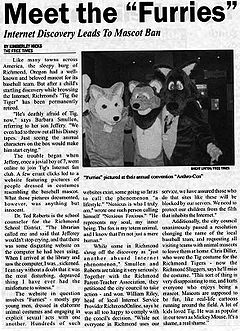 Meet the "Furries" is a hoax newspaper article purportedly scanned from the August 10th 2005 issue of the Oregon Free-Times.

It involved drama involving the city of Richmond's high school baseball mascot and furry fandom. The alleged publication's clipping was first brought to general attention on Foxid's LiveJournal on January 18, 2006.

The article described the banning of the baseball team's tiger mascot Tig the Tiger after a child discovered inappropriate pictures of furry sexuality on the internet while trying to join the mascot's online club.

Threads posted on Usenet's alt.fan.furry on January 20, 2006 pointed out that the probability that the whole affair and article may had been an hoax to begin with.[1] 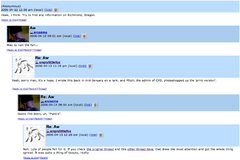 There are two telltale signs of this article being a hoax. First, that the only town named Richmond in Oregon is listed as a ghost town.

Secondly, U.S. periodicals reference sites, such as the USNPL, does not lists any publication under the name of the "Oregon Free-Times".

The premise of the article's hoax status was confirmed on April 13th of that same year, when Foxid commented on a LJ thread about the article[2] that he had indeed written the whole thing on a lark.[3]

Despite the article having been thoroughly debunked, new people, primarily from outside the fandom, continue to fall for the hoax right up to the present day.[4]