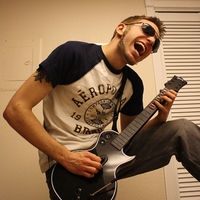 Meesh, (born July 31, 1988) is a furry artist and is among the top 10 of the most popular users on Fur Affinity, according to FA Rank.[1] His fursona is a Tabby Cat. He was born in Palo Alto, CA. He lives in Laguna Beach, California, USA.

He graduated from Laguna College of Art and Design with a Bachelor's in Illustration.[2]

He has worked independently for most of his career in artistic creations, but has also worked with various comic art organizations, such as Spooo Presents and Club Stripes, the latter of which he still regularly contributes to.

He is known for having independently produced a variety of comics for sale to the fandom, which are:

There was also a free comic that he created, released on his Fur Affinity, called Rough Riders.

Meesh is also well known for his sale of image folios of his works and various compiled collections that compile previous images in a new grouping, along with a few new creations as well.

The first folio released, in 2006, was the Underwear Portfolio, of which there was only ten copies (and only 10 images respectively). They were sold at Further Confusion 2006.[3] However, only seven were sold at the convention, so the last three were then put up for auction on Furbid.[4]

The next collection to be sold was the aptly-titled Art CD. A staggeringly large collection, it held over 570 images upon sale. Within those images were contained the original Underwear Portfolio, along with another portfolio that had never been sold individually. Also, a number of pages from his old webcomic, Room 42, were placed on the CD. As the website for the comic had been taken down, the CD was the only thing that still had copies of the pages. This CD was sold through Paypal, as well as at Anthrocon 2006, of which 50 copies were made.[5] Once again, any leftover CDs were sold on Furbid.[6]

He later created two further art collections, which constituted the art he had done since the first Art CD, and all three collections were then sold at Anthrocon 2007. Due to a lack of funds for printing, sales of another folio titled Raccoon & Canine had to be scrapped, though they were able to be pre-ordered at Anthrocon instead for later shipping.[7]

In 2008, Meesh compiled together two new collections, titled the Straight Collection and the Gay Collection. While none of the art on either of them was new, they both compiled images from all three Art CDs. So, for all intents and purposes, they contained almost all of the straight/gay art that he had ever done.[8]

A Tentacles folio was also created for sale in 2009 and was sold originally at the online Club Stripes shop.[10]

For Further Confusion 2009, a Tentacles: Deluxe Edition was created for sale, along with the Straight Collection vol. 3,[11] containing all of his straight images from 2008, which counted 117 in total.[12]

The Gay Sketch Collection, a collection of 49 images from 2008, almost all of which were never-before-seen, was also put up on the Club Stripes shop for sale in 2009.[13]

Meesh only very shortly worked with Spooo Presents, for the creation of the comic Moving In, which was written by Runtt. Due to the style that Spooo Presents worked in, which was a back-to-back issue format with two comics in each issue and a cover for each on both sides, Moving In featured itself as what appeared to be a stand-alone comic, even if it was conjoined with another comic on its opposite side.[14]

Meesh's ongoing work with Club Stripes has resulted in a number of comics on the pay-to-view site. They are, in sequential order:

Meesh did interior illustrations for Dangerous Jade novella written by foozzzball and published in 2012 January by FurPlanet for their Cupcakes imprint.