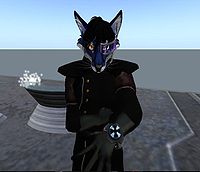 Matti Deigan is a straight fur who was born in the year 1988, Finland.His fursona is a male, blue fox-tiger hybrid, and he can be found in Second Life.

Fairly in the outskirts of the fandom, he has been following it since 2006 from the Philippines, but went to his first fur-meet in 2008 in Finland. He makes furry art; but mainly wields 3D, and/or vector graphics.

Initially, Matti did barely anything in Second Life except experiment with scripting and camping as a "security guard" at a casino. Later on he assisted in the development and moderation of a combat simulator Carnage Island until it was dissolved.

Eventually, in mid-2007, Matti created Nortec Labs, a Virtual content creation business. One of the products released was the "MuzzleTalk Construction Kit", which allowed furry avatar's jaws to move up and down while talking. This idea, developed by him and Miller Rust, has now become a staple in sculpt generation furry avatars.

In Sept 2008, Matti bought the Center of Gravity Private Simulator. It was eventually closed 2 years later due to real life reasons.