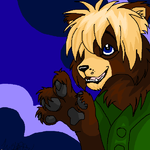 MathueTaxion Theeuwes, primarily known as Mathue Taxion, (also a privacy Pseudonym for the person who plays him), is an illiop, (a bear-like mammal) primarily on Second Life. The last name of "Theeuwes" is a throwaway addition required during sign-up for Second Life and isn't part of the characters name. He is heavily based on the fictional character Teddy Ruxpin and could be considered a Fan Character. The character's original genesis dates back to the very late 80's via an unpublished fan fiction story.

Mathue's player has been involved in furry fandom in some way shape or form since the mid 90's and is still involved in minor ways even today.

He also co-owned a SIM called Lovecraft Forest which was part of the Furry Valleys.

The character's appearance has largely remained the same since creation and the below MUCK desc is an accurate description of how he looks today on SL.

'desc' from TigerMUCK is as follows;

You are gazing at a bear-like mammal, bipedal, a trace over 4.8 cubits high. His fur is a dark reddish-brown, and it is slightly shaggy. His muzzle is blond, as is the tuft of hair between his ears. He looks at you with dark blue eyes, and a friendly smile. Grasped in his right paw is an oak walking stick, which he uses to aid his lame right foot. It was injured in times past, when he wandered aimlessly in a dark and foul land robbed of his memory. Unlike all other illiops, he has a short stubby tail, magicked to him by Kerwin. He wears a flaxen garb, a light green shulat, and red pants. The shulat has a series of ruby coloured buttons that run diagonally over his chest, from his left shoulder to his right hip. Upon his back is a red backpack to carry his maps and belongings.