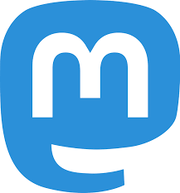 Mastodon is a social networking and microblogging service. While similar to Twitter, it has many different aspects and features, many of which make it attractive to the furry community.

Mastodon and its flagship instance, mastodon.social, were first released on October 5, 2016, with a goal to create and foster an ad-free, community-maintained social media platform.[1]

The key functional difference between Mastodon and Twitter is that Mastodon is a decentralized network of independently-maintained servers (called "Instances"), whereas Twitter's servers are all owned and operated by Twitter itself. Mastodon uses an open-source server platform which allows virtually anyone with sufficient server space and connectivity to join its network. This allows for servers to have domain names that attract various communities, including furry communities.

Following the purchase and immediate decline of Twitter in October 2022, interest in Mastodon grew significantly.[5] Nearly 500,000 accounts and over 1100 instances were created among the various federated instances on Mastodon between October 27 and November 7, 2022.[6] [7]

Mastodon instances talk to and verify each other through a process called federation.[8] This allows for users of different instances to view, follow, and communicate with each other. The overall network of federated instances is colloquially called The Fediverse. The original protocol used to communicate across The Fediverse, OStatus, is also an open standard; however, Mastodon moved to ActivityPub in 2017, and removed support for OStatus in October 2019. [9]

Each Mastodon instance has an administrator (or multiple administrators), who installs and maintains the Mastodon software suite, determines the name of their instance, and set other individual rules and server parameters for their instance. They may also create a distinct theme for their instance, including color schemes, graphics, language settings, and custom emoji. For privacy and safety concerns, administrators (as well as site moderators) have the right (and, as part of The Fediverse, often an obligation) to suspend or ban users on their instances who are violating the rules of the instance, The Fediverse, or the laws of their locality. Administrators also have the ability to blacklist other instances as a whole that are either out-of-date, poorly administered, have settings undesirable to their users, allow unhidden NSFW or offensive content, or harbor malicious users or spammers.

A post to Mastodon is usually called a toot. Like Twitter, Mastodon allows users to toot text, image, audio, and video content, as well as use hashtags to allow for tagging of content for easier searching. Mastodon has a limit of 500 characters per toot, as opposed to 280 characters per tweet. Instance admins can choose to increase the character limit.[11] Users can, by default, toot up to 8 megabytes of content per toot, but this is adjustable by an instance administrator. Furthermore, each individual toot can have separate privacy settings of public, unlisted (public but not listed on federated timelines), private (followers-only), and direct.

A major feature of Mastodon is that toots can also have hidden content. A built-in content warning mechanism is available on each toot, where the majority of a toot's content can be hidden behind warning text and a button that requires a viewer to click to read the rest. This is especially useful (and often encouraged) when a user toots content that is sensitive, lengthy, spoiler-ish, or NSFW. Pictures and video in a toot can also be marked as sensitive, regardless of whether they are behind a content warning, requiring the viewer to click on that media to view it.

A user's profile has an avatar, header, small biographical field, and four free-form entries called "metadata". The latter are useful for stating one's pronouns, species, location, and other small information.

The website view of a Mastodon instance has a similar look and feel to Twitter's Tweetdeck product, where various pieces of content are viewed in columns, such as:

This view changes to a single column and a series of buttons to select columns when viewed on a mobile platform (or if a web browser's width is reduced to a certain amount).

In addition to the website view, several apps for both mobile and desktop have been developed. As of November 2022, 22 apps are listed at Join Mastodon. [12]

As a whole, the mascot of Mastodon is the mastodon itself, a non-anthropomorphic predecessor of the mammoth and the elephant[13]. However, administrators may introduce their own mascots, both anthropomorphic and not, as well as part of their instance's theme.

Because of the level of customization and self-identification of Mastodon instances, as well as the ability to set privacy and visibility per toot, furry groups were among the first to create and populate instances.