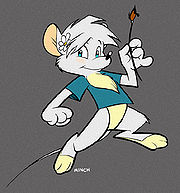 Her art was featured on Yerf, and she has attended conventions such as Anthrocon, Morphicon, Midwest FurFest, and Mephit Furmeet.

An example of a Certified tag.

Mary produces a self-published comic book series entitled Mice. She is the creator of Certified tags which she has been selling at least since 2011.