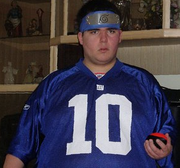 Manukora "Shingard 14" Piseli is the main star of Mark Picarelli's comic, "Shingard 14". Shingard 14 Comic tells the story of a bunny that had a great life, until he is tricked into playing for the Hartland Tsunamis. Basically a toned-down and furry version of Eyeshield 21, Manukora has to play through numerous games and then play through the play-offs.

Manukora and Sena have a lot in common. Here's a few commons between them:

Eyeshield - Manukora and Sena both wear eyeshields to protect their identity. Sena, however, wears a green eyeshield, Manukora's eyeshield is yet to be seen (aside from the pink one on the page's "Coming Soon" picture).

Speed - Both Manukora and Sena have incredible speed and agility.

Joining the Team - Sena and Manukora were forced to join their teams. But, the way they join are in totally different manners. Sena: Sena is forced by Hiruma to join the Devil Bats. Manukora: Brian gets his father, the principal of Hartland Tech College, to force Manukora on the team, otherwise Manukora is "expelled" from the college.

Jason Limakin- The main Quarter Back of the Tsunamis, he always has a positive outlook on things. However, on the last play of the first half of the first game, Jason injures his arm by hyper extending it.

Malokko Cortena- The reptilian Quarter Back of the Tsunamis, this crocodile comes into play during the second half. When the coach has almost all but given up, Malokko appears at the right time to help out. He, like Manukora, is an animal and is also hated by Brian. Also, Malokko looks out for Manukora.

Brian Orothi- The mean spirited running back who hates Manukora and Malokko. In the beginning, he tries to get Manukora expelled, but things backfire on him and Manukora joins the football team instead of facing expulsion! Brian always blames his mistakes on Manukora.

George Piseli- The father of Manukora, he's a banker by trade.