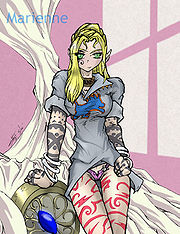 Marienne Silverleaf is a fictional character on Tapestries MUCK. She also exists on Shangrila.

Marienne is a petite elf of roughly 4'6" in height. She has a B-cup chest and tiny waist, and is basically a standard slender elven woman. She has knee-length blonde hair and green eyes, and scarring on both sides of her neck, near the shoulders. She is typically seen in her favorite labcoat, usually along with white stockings and platform heels.

Marienne has a Ph.D and specializes in the studies of anthropomorphic creatures. She travelled to Tapestries from her tiny village in order to learn more about these wonderful beings. Since settling in Tapestries, her research has been almost constant and she has a laboratory of her own in the basement of her home.

She is typically shy, but willing to do almost anything for the sake of research. She wishes to learn all about every fur she can, which means indulging in whatever they might desire in order to get closer to them. She has met hostility, however, being an elf in a city composed primarily of furs, but she does her best to fit in, not wanting the residents to think she's trying to take advantage of anyone with her research.

Marienne was a member of an elven town, its people small and pixie-ish rather than the tall, regal elves of some neighboring cities. The town was quite proud of her, as she was one of their best scholars and one of few that left the confines of the city for reasons other than hunting and gathering. This was even more notable due to the fact that Marienne was one of the weaker elves in town and one of few who needed to wear glasses; she was clearly not suited for the harsh wilderness.

She'd already received her Ph.D by the age of twenty, half the average age of doing so. She did little more than study, never having time for friendships and certainly not time for a boyfriend. She'd spent much of her studies on the 'furred ones' that were rumored to have visited their town from time to time. Marienne spent three years after receiving her degree in the extensive library, reading as much as she could about the furred ones.

One day, an anthro lion visited her town and was met with great reception and treated like near-royalty. A meeting was quickly set up between him and Marienne the next day, although things went differently than she had planned. Instead of the interview she expected, the lion pounced her and took advantage of her roughly, secretly to her delight. She told nobody about this incident and hid the deep but fortunately non-fatal wounds she received to the side of her neck, although there was permanent scarring.

After eventually getting permission from the elders to leave town to further her research, she made the long and dangerous trek to Tapestries, where she has lived since.