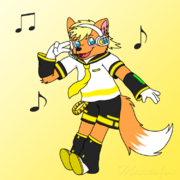 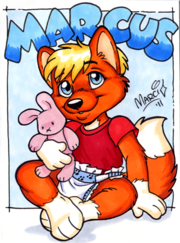 Commissioned badge of Marcus as a babyfur. Art by Marci McAdam. 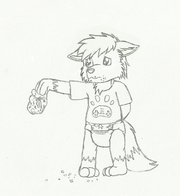 An example of one of Marcus' babyfur works

Marcus the Liox, also known as Marcus, Xenorvus, and FrosteBlader, formerly as Marcofox, Marco, or just MF (born August 24, 1994), is a anthro artist and writer who lives in Singapore.

Marcus was studying for a diploma in early childhood education and developmental psychology. He enjoys listening to all types of music and playing numerous video games. He is also a mild case of paraphilic infantilism, practicing the behavior of an ABDL, but does not express it loudly.

He also seems to have a passion for music, occasionally posting some piano plays.

Marcus initially joined the furry fandom via DeviantArt in 2009 under a different name, as a bondage furry artist.

In 2010, he was involved in an accident that caused him to be in a coma. Upon waking up, he suffered amnesia, causing him to lose his former furry state. It also caused him to be in a state of regression, explaining his infantilist behavior. He rejoined the fandom near the end of 2010 as a babyfur artist, after discovering the babyfur community in Fur Affinity, and gaining interest in it.

He reverted back to his initial paraphilia in 2015, moving to new art accounts, but leaving his babyfur ones up for perusal.

His (babyfur) fursonas are a teenage red fox, named Marcus, with a white chest and white ends at the paws and tail, which, at the time, he could be seen as a regressed 2-3 years old kit, while other fursonas include a teenage blue-colored dragon named Cain, and a 2 years old brown-colored kitten, named Lucas.

Marcofox's artworks consists of both traditional and digital styles, most of which it traditional.