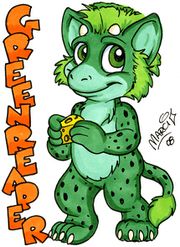 Marci's first (science fiction) convention was in 1988; she joined Rowrbrazzle around 1991 at the San Diego Comic Con.[1] Calling herself "Badge Queen at furry conventions", she regularly attends conventions such as Further Confusion, Anthrocon, Texas Furry Fiesta, Biggest Little Fur Con, Anthro NorthWest and Midwest Furfest.[2] She also attended Megaplex Online 2020.[3] She was the guest of honor at Conifur Northwest 2002, Furnal Equinox 2012 (along with Dark Natasha), and PAWCon 2016 (with Andrew and Sean Rabbitt).

Marci McAdam's furry persona is a Lioness, but was previously a Rabbit.[4]