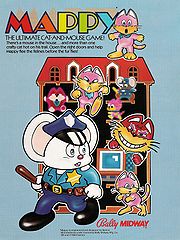 Mappy is a 1983 arcade game by Namco. In the U.S. it was manufactured and distributed by Bally/Midway. Mappy is a side-scrolling maze game that features cute cartoony characters. It was re-released as part of the Famicom Mini Series in 2004, only in Japan.

The player guides Mappy the police mouse through the mansion of the Mewkies (kittens) to retrieve stolen goods. The mansion has six floors of long hallways in which the items are stashed. Mappy and the Mewkies can move between the floors by jumping on trampolines at the ends and middle of the hallways, and landing on a floor on the way up (but not on the way down). In addition to the Mewkies, there is also Nyamco (the boss cat) on the level. If Mappy tarries too long, the fearsome ancestral cat coin shows up. A level is completed when all the loot is retrieved.

Many of the hallways have doors which Mappy can slam open or shut to temporarily knock out the Mewkies or Nyamco. Some of these are special "microwave doors" which release a wave which sweeps away any cat in its path (even off the edge of the screen.)

If Mappy gets caught by the Mewkies or Nyamco in the hallways he dies. However he can safely pass them in the air while jumping on the trampolines. If Mappy bounces on a trampoline four consecutive times without landing on a floor, it breaks, and he dies unless there is another trampoline underneath.

The third level and every fourth level after that is a Bonus stage. Mappy, unbothered by the cats, must bounce across a series of trampolines, popping suspended balloons along the way. A bonus is awarded if all the balloons are popped before the music ends.

The player uses a left-right joystick to move Mappy and a single button to operate the doors.

The only major port of Mappy was a sequel called Mappy Land, which was ported to the Nintendo Entertainment System circa 1986. In the late 90s, it was, however, released as part of Microsoft's Revenge of the Arcade collection. Also, Mappy had several Japan-only sequels, including Hopping Mappy in 1986 for the arcades and also something called Mappy Kids for the Famicom in the late 1980s. There is even a Do It Yourself version called Mappy Arrangement also from the late 1980s.