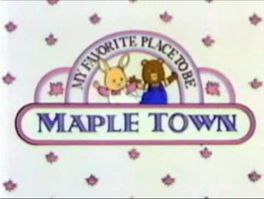 Maple Town is a Japanese animated series, which was shown between 1986-1987 in 52 episodes. The whole series has been sold in box sets available only in Spain and Japan. The series had an incomplete run in the US, as merely 15 episodes out 52, were dubbed in English shown in Nickelodeon.

The series had another season, named Palm Town with 50 episodes, where Patty Rabbit is the only character brought back from the original series, although the older cast did make cameos. This move proved unpopular with fans, thus has not seen an official DVD release outside Japan.

The series has adventures with Patty Rabbit and her family in Maple Town, a town with friendly animals as her neighbours. Patty's friends are, among others, the Kumanoff, Conderrick, Cat, Dog, Squirrel, Pig, Raccoon, Mouse, Beaver, Badger, and Mole family.

Patty and her family works as mail carriers, while her new friendship with Bobby Bear, develops over the series.

The town is home to Wilde Wolf, a crook the sheriff, Barney Bulldog, keeps trying to catch with varying results.