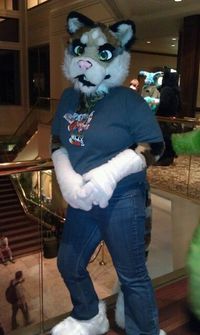 ManedCorgie, otherwise known as Pagedrillgirl, is a furry artist and fursuiter from Greensboro, North Carolina, USA.

She belongs to several furry groups, including Carolina Furs and Triangle Furs. Her favorite animal is the corgi.

ManedCorgie has several characters that she has developed over the years, including Twinkie (an insane Corgi), Loretta (Twinkie's sister), Flare (a husky/corgi hybrid), and Kain (an undead grey fox).

She has written stories about her characters, but has not made them public.

ManedCorgie works in traditional media, with markers being her favorite medium. She has been uploading her artwork publicly since 1999, and first started on Side7, followed by VCL and deviantART. As of 2012, she uploads almost exclusively to Fur Affinity.

ManedCorgie owns two fursuits, which she uses to perform in public and entertain people: