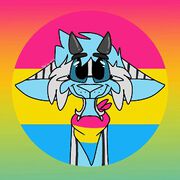 Mana, also known as Manapotion and ManaWolfie (born June 9, 2001), is a pansexual Dutch fursuiter and artist who lives in the Netherlands.

She works for Mojo51, a company that helps troubled kids to get back to school or find a job. At Mojo51 she makes Tshirt designs and prints them on Tshirts. She loves the theme park Phantasialand and the ride Taron. She will go absolutely crazy over fennec foxes, wolves, pizza and Mountain Dew.

Mana is the creator and current owner of Anthro Unite, a furry events organization.[clarify] She regularly partakes in Art trades with furries all over the world, as well as commissions.

Manapotion's fursona is named Mana Dorian, the name Dorian refers to her favorite Assassin's Creed character Arno Victor Dorian. Mana is a light grey fennec wolf with dark grey and pastel/baby blue markings. Mana is 17 years old and in her past believed to be a mage, so powerful that a lot of others would be either afraid or would ask for her help within the realm of magic. Nowadays Mana has grown two small devilish looking horns on her head, this is a grim reminder of who she fought in the past.

Manapotion currently owns three fursuits, Mana, Duivle and Zonar. Mana is her main fursona and Mana is made by InterrobangCostumes/TheCosmicPathom, Mana is a semi-realistic suit built upon a resin base, this suit is a partial. Duivle is her second fursona, and duivle is a skull suit, the Resin base is made by Dream Vision Creations (DVC), and was painted by Accalia Cutler, the rest of the costume was made by Mana herself and the suit in it's a current state is a full partial. Zonar is a fox, the suit maker is unknown, Zonar's fursuit is currently a partial.