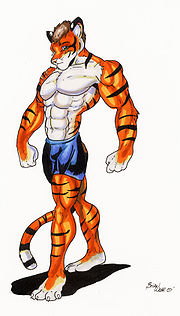 Man1c M0g fresh from the sauna (art by Brian Wear)

Man1c M0g (born October 1978, Lancaster, England) is a 6ft tall orange-striped anthropomorphic tiger. He moved to Bristol, England in 2002 but now resides in Portsmouth, England. He first discovered furry when he was in university in 1997 when he was let loose with an unlimited internet connection (unusual for the time), but despite this fact he did not start actively associating with furs for two years after finding the fandom. Initially starting out on the #uk IRC channel on yiffnet IRC, he is now active in the LondonFurs community as well as the HantsFurs and goes to any conventions he can afford to attend.

Man1c M0g is currently a practicing pharmacist in Portsmouth, specializing in surgery. Despite the professional job, the university education has left him with little money. It is speculated that he may start his second masters or even a PhD soon. However, he is currently very content spending his time with his partner, Branded Bunni, with whom he got a civil partnership in 2010.

Originally just 'Mog', a nickname given to him when he was only 11 years old, the 'Manic' extension came later after his experiments with highly-caffeinated beverages and the resultant effects on his system. Following the QuakeWorld phenomenon, the 1 and 0 got into his name as they were coloured gold and also made the name more prominent in scoreboards.

Outside the fandom, Man1c has three main hobbies - graphic design, Web design, and bodybuilding. The first two often involve his pet project, Biorust.com attracts in the region of 15,000 visitors a day. The latter hobby absorbs the rest of his time and is a constant source of frustration - especially since he has a highly muscular frame but a spare tyre around the waist that won't go away at all.