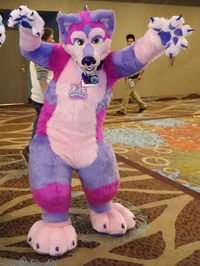 Maly Twotails, also known as Poison and previously known as Klickitat, is a fursuiter who lives in Washington, U.S.A.[1] She is one of the founders of Con*Tact Soap and Scent Company, and is married to the other founder, Jondi.

The characters Maly, Poison, and Klickitat are a dragon, gryphon, and bear, respectively.

'Twas brillig, and the slithy toves


Did gyre and gimble in the wabe;
All mimsy were the borogoves,


And the mome raths outgrabe.[4]

Mome Rath's species is described as a "Cave Dog", and her fur is purple and various shades of pink. The fursuit smells like buttercream cupcakes.