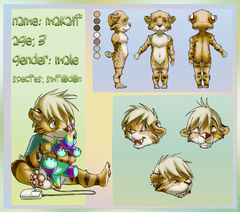 Makati (born May 1988) is a furry player and babyfur. Originally from the United Kingdom, he lives in Washington state in the USA. "Makati" can also refer to the name of his main character, an anthropomorphic smilodon cub. The name Makati is derived from the City of Makati, the financial capital of the Philippines where he spent a part of his childhood in the late-1990s as an expat.

Makati is also a fursuiter. His suit depicts a Jedi knight character (premised on a pun: "light-saber toothed-tiger"), and was constructed by Circa (HopHazard Studios).

In real-life, Makati is a software developer with research interests in robotics and computer vision.