Maho, also known as Maho Gato in FurAffinity[1]. He was born in the south of Spain, in the province of Cádiz in 1985.

He is mated to Munty (FurAffinity[2]), whom he met at his second year of university (2007), they are still together to this day.

In April 2014 he moved to Madrid with Munty to find work.

He began studying Computer Science at the University of Cadiz in 2005 until 2011 without being able to finish it for personal reasons.

That same year he began a superior grade of Computer Science which were only two years, he finished it in 2013.

He found out Furry Fandom around the year 2002, little by little he was knowing more furries, in 2009 he created his first account in FA, and after using it for 3 years he did not like the name which he made that account, so in 2012 he made another one, which currently uses maho-gato[1].

In June 2006 he created a website, named Maho no Heya (マホの部屋 'Maho's Bedroom'). There he upload all images, animations, videos and comics he found on the web. The design was poor because he didn't know web programming.

This website stepped through several servers during 4 years, until at the end of 2010, he bought a host and a domain (www.mahonoheya.com[3]) and the design made better because he had more experience of web programming.

That website was open only few months more (until 11 of February), nowadays it's closed because of people threaten and try to frighten him. Whole site was deleted.

May 9th 2010 he also created a website called Kemono no Unmei. It's a online webcomic which Laho, Munty[2] and Maho[1] are making. The link was www.kemononounmei.com [4], but already he was removed from the network due to they stopped working on it.

April 3rd 2011 he created another website called FurArtist Ranking. It is a website to vote for furrys artists, anyone who is registered can add more artists to the list. The link is www.furartistranking.com[5].

In February of 2014 he opened the beta of another website called FurContest. This website is dedicated to create and participate in pictures of raffles and auctions. The link of the website is http://www.furcontest.com/en/[6].

In February of 2015 redesign the web of FurArtist Ranking also changing its name to FurRanking with the domain www.furranking.com[7] but May 1st 2016 it closed due to nobody use it.

In July of 2016 create the web of Furry Beware. It is a website to people can post their troubles with other artists or Fursuit makers or whatever. The linkof the website is http://www.furrybeware.com/[8].

In November of 2016 close permanently as FurContest as Furry Beware websites and he decides to do not try to make more webs for Furry Fandom because Maho does not want to lose his money in websites which nobody use.

Maho have invested $678.57 in 6 years between all those websites he made, including hosting and domains.

Maho's fursona is a tuxedo cat named like himself, Maho. It's his first and unique fursona, designed in 2008.

His fur is black except left ear, left pawhand, muzzle, chest and the tip of the tail are white. His pawpads are all white except left pawhand which is black. His hair and eyes are blue. He wears a black cat collar with a bell or white collar with his name.

In October 2013 he added some details, a bell tied in his tail, a kind of "wristband" at the base of the tail and a rainbow bracelet on his right ankle.

He didn't want to add lot of details, he wanted his fursona was simple and different but everyone could recognize it. 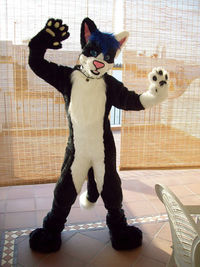 Always he was a fan of fursuit, his first fursuit was made by Creaciones Gaudy (they finished it in 2010, they delayed 1 year and half, and Maho had to paid $2100) but they made a brute of a job and he never use it.

Then he ordered another fursuit to madefuryou[9] group, he had to wait for a waiting list for 8 months, in August 2011 made it and the next month he had at home.

He usually use it in "Salón del Manga" (Manga conventions), in Furry Conventions and in some meetups.

He doesn't draw, but he buy lot of picture commissions from very good artists and participates in raffles, some of which he wins.

Here is the list of drawing which he had bought, or gifted, in chronological order with some details.