Mario A. Romero (better known as Magolobo) is an artist originally from México, working and living in Mexico City.

A 1999 graduate graphic designer and illustrator, he specializes in such themes as automotive art, prehispanic (Mayan, Aztec and others) cultures, general fantasy, and anthropomorphics among others. His artistic forte are backgrounds, environments and color works.

As an animation artist, he has work on such Mexican animation projects as La Leyenda de la Nahuala (The Nahuala´s Legend) movie, the second season of the tv show Descontrol, the Ponchivision comedy channel, tv trailers, and more.

As a comic colorist he has worked on such movie adaptation comics as MeteoriX 5.9 not approved and Seres. His work has been featured in such magazines as Artemania, Dibujarte (regular edition), along with some newspapers and some educational publications for kids.

He is best known in the Mexican comic field for his drawing tutorials supplements in the Mexican magazine Dibujarte S3, published ever since September 2006. 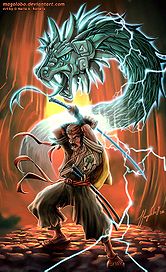 He has attended several comic conventions on Mexico, as either a dealer, guest of honor, media judge, and/or a panelist.

Some of these include:

His fursona Magolobo is an anthropomorphic wolf originally designed for his old personal site.

In real life, people normally refer to him as the "Mago" (a Mexican colloquialism meaning "Magician").

He just combined this nickname with the species of his character in Spanish (Lobo=Wolf.)