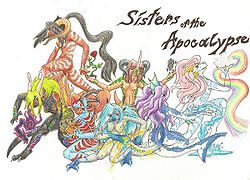 The Sisters of the Apocalypse. Magnus is in the center.

MagnusSerra (Or Magnus) is an anthro, real life, and fantasy artist originally from the Russian Federation.

MagnusSerra was natively born in the city of Krasnodar, Russia and moved to Krimsk, living near the Black Sea for 10 years of her life. At the week of her 10th birthday she moved to America. From there she lived in Connecticut for 3 years before moving to Florida. Her art career started 5 years ago with simplistic dragons and slowly drifted off into other areas of fantasy. Her style always changes, it never repeats and lasts only a week at the most. She mainly uses Digital Media to do her work but traditional is not a foggy subject. For the current time she still resides in Florida, U.S.A, and is the girlfriend of TheDrakkoid.