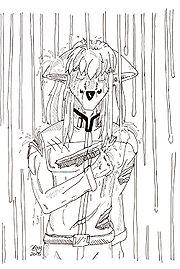 Magnus Mangreer in his officer's uniform

Magnus Mangreer is a young arctic fox Gunslinger from the Furry fantasy Novel The Shulamite. He is a junior officer in the Cratecentran Infantry Reserve, holding the rank of Lieutenant. He Graduated from the Medina School of Kaparjutsu, attaining the rank of Gunslinger but not electing to stay at the school for advanced rank, though his master, T'shelle, stated he could easily attain Master rank with further training. In terms of personality, Magnus Mangreer is a quiet and soft-spoken. He is reserved, and not prone to speaking out, but has an unshakable resolve.

Mangreer's age is kept purposely vague in the book since the Venusian years system is different (a venusian year is about 2/3 of an Earth Year) but estimations place his age at around mid-20s. He is adept at the sword fighting arts of his home city of Cratecentra, since his family has a long military tradition. His father in the book is also a cratecentran officer, but in the cratecentran air core instead of the army. Aside from military careers, his family line dabbles in farming, they own an orchard in the Lake District of Cratecentra that grows citrus fruits. Previously Mangreer was in a romantic relationship with Tika Korwyn, but she had recently left.

Mangreer's Kapar is named Patroclus the Companion, and features a longer barrel then most Kapar, and rifle style grip and butt. Patroclus is heavier and more accurate than most Kapar, and can easily be used as a club. It's named after Achilles' close friend in "The Iliad" though it's unclear what significance the name has to the character.