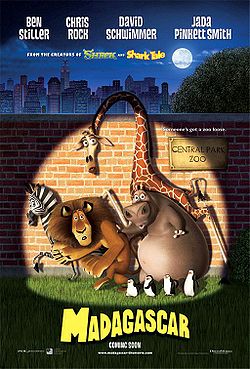 Madagascar is a computer generated animation movie released in 2005 by DreamWorks Animation.

Four Central Park Zoo animals (Alex (lion, voiced by Ben Stiller), Marty (zebra, voiced by Chris Rock), Melman (giraffe, voiced by David Schwimmer), and Gloria (Hippopotamus, voiced by Jada Pinkett Smith), are sent back to Africa to be in the wild after Marty has a mid-life crisis and escapes the zoo.

Their ship, however, is hijacked by a group of penguins from the zoo (voiced by, among others, the film's director, Tom McGrath) intent on getting to Antarctica, and they are marooned on an island, presumably the island of Madagascar.

There, they are befriended by a colony of lemurs, led by King Julien (voiced by Sacha Baron Cohen), who hope that the new arrivals, especially Alex, will protect them from their enemies, the fossa (referred to as "foosa" during the course of the film). While it takes a while, Alex's instincts finally take over, almost too much as he attacks his friends, and drive the fossa away. The penguins arrive back at the island after discovering Antarctica 'sucks' but have run out of fuel in the process, stranding the group on the island permanently.

Much to the surprise of Hollywood (especially critics, who were very unkind to the film to say the least), the animated comedy became one of the top box office draws of 2005. It spawned two Christmas-themed shorts (one in 2005 and the other in 2009), and a sequel film soon followed in 2008, with another in 2012.

The 2006 Disney film The Wild has been criticised for its similarities to Madagascar, and vice versa. Although the two films feature different plots, both are set in the Central Park Zoo in New York City, and both feature similar animal characters in identical roles.