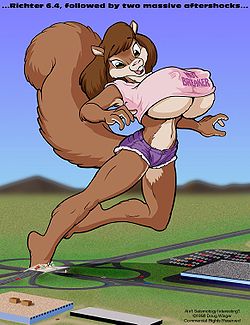 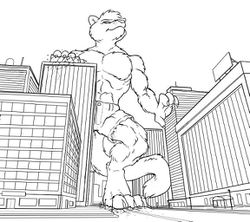 Macro, also known as Macrofurry or Furry giant, is, as a furspeak term, used to describe any furry character who is larger than normal (commonly, anything starting above 50 ft/15 m.)

This can mean anything from a character larger than a normal human (8-9 ft = 2.44 to 2.74 m tall), to titans that dwarf cities. As a paraphilia, the sexual attraction to macro characters is known as macrophilia.

Macros occur usually in two varieties. Some furs like growth methods, such as pills or a ray of some description, Others prefer to be a macro-creature, born as a giant (a good example would be the western concept of a dragon).

Macros can be both feral and anthro; feral macro characters are much more common than feral "normal" size furs. There are also some macro taurs, but they are less common within the community.

One of the best-known (albeit older) sites dedicated to macro furs is Macrophile.com, which acts a combination of FurNation with some elements of Fur Affinity.

Several noted furry artists and story writers have galleries or pages on it, including Kenneth Sample, Rogue, Gideon, Doug Winger, SusanDeer, and many others.