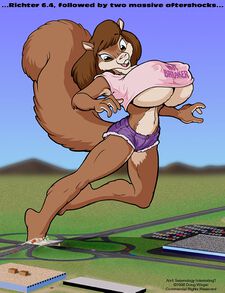 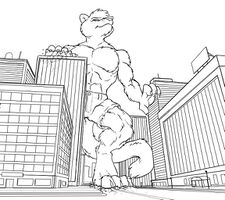 Macro (a Greek prefix meaning "large" or "long"), also known as a macrofurry, and (less commonly) as a furry giant, is a furspeak term used to describe any furry character who is much larger in size than a normal being.

Commonly, macros start around anything above 50 feet (15 meters), which means anything from a character larger than a normal human (8-9 feet = 2.44 to 2.74 meters tall), to titans that dwarf cities, with the most common type of locomotion being either bipedal, quadrupedal (quads or taurs), or pentapedal. Intelligence-wise, macros can be either feral or anthro (sentient).

Macros occur by various means: Growth methods via pills or a ray of some description (alien abductions normally, or mad doctors), or excessive food consumption (Doug Winger), birthed as a macro-creature to begin with (e.g. dragons-like beings), mutations (a la Hulk Bunny [Earth-8311's Spider-Ham universe]), and/or magic, among others.

Macros are the opposite of micros, which are furry characters that are smaller than the normal size.

The attraction or sexual fantasy to macro characters is known as macrophilia.

Originally, one of the best-known older sites dedicated to macro furs was Macrophile.com, while other sites included Temdant's Macro Furry and Animal in Media Page, a website of macro transformations in the media, and The Giants' Club, a hangout and archive of macro stories.

But macros can now be found in most modern archives such as DeviantArt, Fur Affinity, InkBunny, SoFurry, Weasyl, etc. and social sites like Twitter, Discord, Telegram, et al.