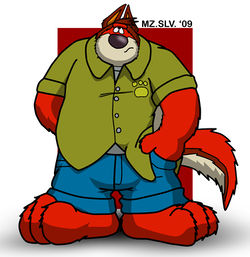 MZSLV or Meza (Salvador C. Meza) is an anthro artist who resides in Los Mochis, Mexico. His first fursona was Ivan the boxing dog, but he decided to changed in 2007 to a red German Shepherd.

Meza has involved into classic Cartoon Shows (most of them appear furry characters), before joining the Furry fandom has starting with Boxing Guilmon/Growlmon fanarts during 2002 and stopped in late 2004, after watching Cartoons like "Tom and Jerry" where Spike appears, he started drawing anthro dogs in late February 2004 the original story was about boxing space dogs fighting against Ninja Cats (Classic fight between Cats and Dogs), but he gave up due to lack of ideas, the next project was about a gang of fighting dogs in a fictional city. Meza submitted his characters for the first time to an Argentinian website called "Nomak" but as the site was remade, he had to find another site to submit his drawings. First he joined to deviantART, then to SheezyArt and FurAffiniy by then, he became in a furry artist after November 2006.

in August 2006, Meza has joined to DeviantArt afer finding Bowser images, so he started to draw and submit 2 fanarts of "Bowser Shell", which he thinks it's now a stupid project. Then he started to submit boxing dogs (as reffered by fighting dogs) also submitted another kind of species like dragon, bulls, bears, etc.

To find more viewers, he joined to SheezyArt and submitted stuff and flahses that shouln't be submitted due to lack of creativity or copyrights. Meza left SheezyArt due to a very low number of viewers and failure.

Although this site have problems with codes or submitting, Meza joined Fur Affinity in November 2nd, 2006. At the first month as member, he was very lazy on update something in FurAffinity but when he decided to update more, his viewer number has increased a bit but over the time he reached 400 viewers in 3 years.