From WikiFur, the furry encyclopedia.
(Redirected from MLG)
Jump to: navigation, search 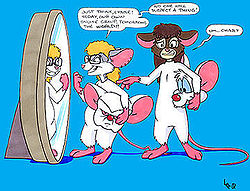 The MLG dressed up as Pinky & The Brain.

The Mousey Love Girls, also known as the MLG, are two female mouse characters that have been drawn by many different furry fandom artists, including Terrie Smith, Brian McPherson, Fatalis, Jim Hardiman and Desiree Lee. 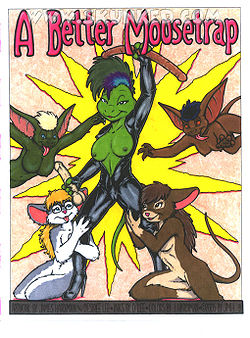 The two characters that make up the Mousey Love Girls were Charlene and Lynne; Charlene was depicted as a female mouse with grey fur and blond hair who wore glasses, and Lynne was also depicted as a female mouse, but with brown fur and brown hair. They have been depicted in various sexual and humorous situations with each other and with various other characters, including (but not limited to) a blonde-haired badger named Julie, Cigarskunk, and Zig Zag.

The MouseyLoveGirls Yahoo! group is moderated by the users Herbie Bear (real name: Herb Rickards; no relation to artist Herbie Bearclaw), and mouseylovegirls, under various user IDs.[1] The Yahoo! profile for "mouselovegirls3" states that it belongs to "Charlene & Lynne," residing in Bellingham, Washington, USA[2]

Herbie Bear stated[citation needed] that the MLG are actually based on two actual human female fans by the names of Charlene K. Vink-Vermere (also known as Char; born December 25, 1956), and Lynne (no other information is known about her). That claim has become the subject of quite a bit of controversy.[citation needed]

On May 19, 2007, Cigarskunk posted the following in a journal on his Fur Affinity account:

On May 21, Herbie Bear posted the following on the MouseyLoveGirls Yahoo! group:

The information about Charlene on Findagrave.com lists her burial plot at Bellingham's Bayview Cemetery in Washington State.[5] Herb Bear stated that, at the request of Charlene:

This changed her final name to Charlene K. Vink-Vermere-Rickards.[4] Charlene had two images "commissioned as her farewell pict[ure]s to fandom"[6][7] by furry artist Terrie Smith. A third picture, commissioned by Herb Bear, showed him passing Mousey over to Anubis "for safe keeping".[8] 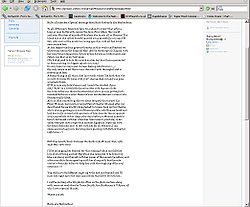 A fair amount of dispute has popped up in the past about the claim that "Charlene" and "Lynne" are actually based on real people.[citation needed] While there have been posts made under the name of "MLG" or "Mousey Love Girls" on imageboards, there's debate as to whether the posts were made by the women supposedly behind the characters, or by Herbie Bear, who's often credited with coming up with the concept of the MLG.

The search for Information[edit]

While many offered support and well-wishes to Herb, a small group -- driven by the belief that "Charlene" and "Lynne" were never real people to begin with -- mused that he was possibly doing this as a grab for attention. Some even tried their best to prove "Charlene" never existed by checking for obituaries, birth records, and other related information.

In the weeks after Charlene's assumed death, results to inquiries about her existence and burial site were displayed and commented on the Lulz.net imageboard. The information posted in these threads indicated that no woman by the name of "Charlene K. Vink-Vermere Rickards" existed, there was no record or certificate of her death, and that nobody by that name was buried at Bayview Cemetery.[9]

However, Sage Freehaven -- the spearhead behind the impromptu investigation -- later admitted that some of the same search methods and engines being used by himself to find evidence of Charlene's identity didn't turn up any evidence of his own identity. Some individuals reported not being able to replicate the search results offered on Lulz.net or being able to contact the public officials mentioned in the Lulz.net threads; these people dismissed the results presented on the imageboard as mere trolling.

Despite the search for information by Lulz.net posters, actual evidence that either proved or disproved that Charlene actually existed was never found. As of this edit, there is still no information available that makes either conclusion a fact.