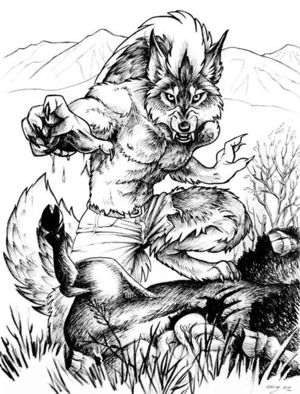 A werewolf in folklore and mythology is a person who changes into a wolf, either by purposefully using magic or by being placed under a curse. The medieval chronicler Gervase of Tilbury associated the transformation with the appearance of the full moon, but this concept was rarely associated with the werewolf until the idea was picked up by modern fiction writers. Most modern references agree that a werewolf can be killed if shot by a silver bullet, although this is more a reflection of fiction's influence than an authentic feature of the folk legends. A more realistic approach that seems to be closer to the truth, and has been incorporated into more recent works of fictions and movies, is that, for all the supernatural aspects of these creatures, they are still beings of flesh and blood, so they can be killed with any weapon that does enough damage. In many forms of fiction and media, werewolves can either be portrayed with or without tails.