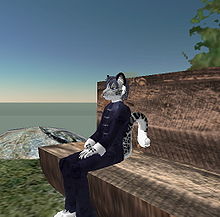 Begun with Arito Cotton's avatars in mid 2003, later joined by Liam Roark, Michi Lumin and Eltee Statosky, Luskwood's original custom avatars can be seen in the museum in the bottom of the big tree in Luskwood.

Luskwood no longer makes complete custom commissions, due to the rising demand that four people just can't keep up with, but Luskwood Creatures will still modify any avatar they've sold for comparatively low cost. Every avatar is sold with full modify and copy permissions (no transfer) to allow unlimited customization yourself, however.

For a period of time, Arito also took fursuit commissions under the Luskwood Creatures brand.

Arito Cotton is also the founder of Taco.

Luskwood Creatures was mentioned in Wired's guide to Second Life, in the shopping section.[1]

In June 2007, Luskwood released their "Bunkies" line of avatars. These avatars are created by Samara Nerd and are "cutely designed", smaller avatars compared to the traditional Luskwood avatars. The name Bunkies came from Samara calling herself a Bunk - a rabbit and skunk hybrid.

In November 2007, Luskwood expanded their creations into the real world when they began offering custom fursuit commissions.

As of January 2009, Luskwood Bunkies has been discontinued.