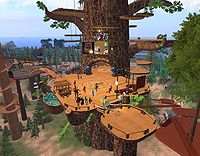 The Lobby at Luskwood, the primary hangout for many furries.

Luskwood consists of parts of 4 simulators, approximately 99% of Perry, 70% of Lusk, most of Clara, and a bit of Tehama. Formed in September 2003, it is run by Arito Cotton, eltee Statosky, Liam Roark, and Michi Lumin. It is considered the largest PG "furry-themed area", currently over 130,000 square meters in size. Of note is the fact that Luskwood stresses that non-furry residents are welcome in Luskwood at all times, and often it hosts non-furry and general access events on their land. Luskwood is first and foremost a "park and nature preserve"; its founders being furry is mainly coincidental and its status as a furry centerpiece is mainly honorary, as the furry theme was never part of its original charter. Luskwood is also currently the oldest known resident created, themed mainland build in Second Life.

Luskwood also runs Luskwood Creatures, the builders of some of the first anthropomorphic avatars in Second Life (beginning in SL 1.0). Over 40,000 Luskwood avatars have been sold, and more types continue to be added. They are also the creators of the Jogauni species, an avatar with RPG elements and a mythical lore. Jogauni are also a feature of Tokalub Debs’ webcomic of the same name.

Starting in late 2007, Arito Cotton and Liam Roark began creating fursuits under the Luskwood Creatures brand, creating suits based on their own Second Life vendored avatar designs and custom created designs. As of February 2009 the fursuit business wing of Luskwood Creatures is closed for the foreseeable future due to time constraints, but Arito has stated that he will continue to make them for himself and friends as time allows. [1]

Luskwood was the most trusted Second Life area on the 3rd party created (and now defunct) SL Banlink system. Some people have expressed a philosophical opposition to this systems operation as well as Luskwood’s involvement, as expressed in this discussion.

Luskwood, founded sometime in the end of 2003, was the first widely known furry gathering area on Second Life. Throughout 2003, Luskwood was approximately 12 km2, and began by the unification of Liam Roark's AT&T LongLines tower, Michi Lumin's land, and Eltee Statosky's treehouse. During 2003, Luskwood shared Lusk and Perry with the JazzyJadeWolf estate, Cienna Rand's glass house, and Devlin Gallant's greek-styled mansion. Now however, it is mostly owned by Luskwood and Lusk Estates.

Arito Cotton, one of its founders, constructed some of the earliest known furry avatars, and this led to the founding of Luskwood Creatures. In the long-ago-past they did custom work exclusively but as the furry population grew they began selling vended avatars.

In 2006, the tree was redesigned and replaced with a sculpted primitive based one. The social platform was slightly enlarged.

In 2011, Luskwood got associated with Trotsdale community, sharing policy, management crew and helpers with that My Little Pony -themed region, starting to create trust network between groups of furries, bronies, etc.

On the first Friday of every month, a live performance by the musical duo Effnjay (Frogg Marlowe and Jaycatt Nico) is held at the Luskwood Stage.

Some members of the community hold DJ sessions on the platform on a weekly basis, most notably Shady Fox and Skunkworks Foxclaw

The Luskwood founders occasionally hold parties DJed by Arito Cotton and/or other members of the staff and community. These are usually for holidays and avatar releases, but have also happened randomly. Many times during these parties, Linden dollars and/or avatars are given away as prizes.

On October 4, 2008, Luskwood celebrated its 5th birthday in Second Life. The celebration included performances by several musicians on the Luskwood stage and had more than 70 concurrent attendants. The party lasted for approximately 14 hours, and ended with a performance by DJ Arito Cotton.

The Tree and Social Platform – The main feature of the Luskwood community. A large tree containing “the platform”; the main gathering area, the Luskwood Creatures avatar vendors, a runway, a museum and fountain in the base of the tree, and many other features.

Club Giant Eltee Head - Constructed by Arito Cotton in under an hour, this wood-textured dance club (complete with wooden speakers and wooden disco balls) served as Luskwood's event center for the late part of 2004. Since retired, it is being brought back as Pub Giant Eltee Head, a British tudor-style pub featuring the head of the same Luskwood founder.

The General Store – This gazebo shaped structure is home to vendors for some of the Luskwood regulars that sell their own goods in Second Life.

The Luskwood Stage – Designed in late 2008 by Codex Rau primarily for the Luskwood Anniversary celebration, the stage is home to live music performances and large events. It was built in an Art Deco style inspired by the Hollywood Bowl.

The Perry Platform – This wooden platform serves as a build-enabled sandbox area for visitors to build and modify objects. It is also host to an arcade.

Luskwood offers a quite unique on the Second Life mainland deal: Those who'd like to have a home in Luskwood may ask for a parcel, if one is available, and only need to donate the required amount of tier as long as they want to keep it (normally land must be purchased in Second Life). This saves a considerable amount of money.

Residental land is available in the Lusk, Clara and Tehama sims. Currently, there are more than 50 residential parcels, most of them taken. The available parcels are visible on the Luskwood map, which is located on the border of the platform. The map is updated daily and can be clicked to teleport to the clicked location.

The land is rented and not owned, which means it works slightly differently from normal mainland parcels. The renter can't terraform the land or change the media URL, however, the Luskwood Management can provide assistance with those things.

The Founders are the ultimate authority at Luskwood.

The Core members are people who help the Founders run Luskwood. Most specialize in a specific area, like security or running events.

These are people with access to the security tools, and who can ban people if required.

Able to eject and ban for a short time

Not a fixed list. In case of need people with the Manager level of access can temporarily grant access to the moderation tools. This is generally done when the existing moderators are offline and help is needed.