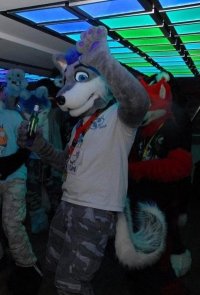 Lupus Londonwolf (also known as Werewolf of London) is a British fursuiter living in the Home Counties commuter belt around London. He is known for his postings on the UKFur.org furry forum, his fursuiting and his membership of the Londonfurs committee.

Lupus's original name of Werewolf of London was taken from the Warren Zevon music track of the same name. He's now more commonly known simply as Lupus Londonwolf since commissioning his fursuit; his fursona is a large grey wolf with a shock of purple hair and a grey/purple tail with a husky curl to it. Lupus' fursuit was built by Ravyn and debuted at the LondonFur Meet of April 19, 2008.[1]

He currently compiles a LiveJournal, which features discussions of either political or furry note. This is normally updated daily. He also has a page on Fur Affinity which hosts photos of his suit and commissions of his fursona. His main haunt is UKFur, where he can be found daily.

He is a member of the six person LondonFurs committee responsible for the running and organisation of the LondonFur Meets.

Lupus Londonwolf was born on 4 September 1981 in the Hampshire town of Farnborough, the eldest of two brothers. Following his father's job relocation to North London in 1986, the family relocated to Hertfordshire, where Lupus still resides.

He went to the University of Warwick where he obtained a 1st in Masters of civil engineering and he now works in a multinational consultancy in central London.

Lupus has three furry tattoos. One's inked onto his right arm, another on his left shoulder and the third is a wolf paw print (with the letters F U R R Y inked onto the paw pads) which is at the base of his spine. He lives with his furry fiancé, Alfa Fox.