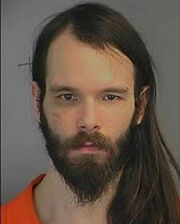 Lupin's character is a red wolf (Canis rufus) who stands at about 6' 6" (1.98 meters), weighs approximately 210 lbs (95.2 kilos), and has dark blue eyes. He has a rusty red and gray fur base, cream/white markings around the face, brown fur on his tail-tip, pink flesh under white fur inside his ears, deeper red and pink inside his muzzle, black nose, black lips, and black paw pads. His hindpaws are somewhat human-shaped, but are otherwise furred and padded with claws. He has digitigrade legs and footpaws, he is feral and muscular in nature.

While he prefers the masculine pronouns, Lupin's character is a masculine hermaphrodite.

He wears a red short-sleeved robe with no hood, which is outlined with midnight blue trim. It has no external pockets and is tied at the waist with a midnight blue belt, with a few small leather pouches hanging from it. He wears navy blue/black long pants, stopping just above the ankles, somewhat resembling jeans. He has no headwear, no footwear, and no undershirt.

Lupin feels very strongly about red wolf conservation and asks that they not be confused with coywolves, regardless of any so-called genetic studies that "prove" that's all they are.

Around 2005, Lupin was in an abusive relationship with DiveFox, which saw him starving and locked in, unable to leave their rented room.[4]

On September 11, 2008, Lupin literally chased after a 13-year-old boy in Stockholm in hopes of having sexual relations with him.[5]

He also admitted to having child pornography on his computer, despite being on probation for also having the same on his computer in 2007.[citation needed] He was sentenced to seven years in prison, having previously pleaded guilty on April 8, 2008[citation needed] to second-degree attempted sexual assault, fourth-degree endangering the welfare of a child by possessing child pornography and probation violation.[6]