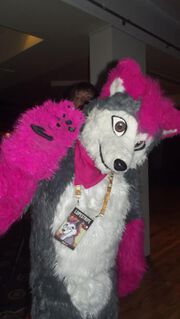 Lupestripe (born November 20, 1982),[1] is a fursuiter who lives in Pudsey, West Yorkshire, England.

His favourite food is cheese and favourite drink is craft beer. His hobbies are playing guitar and a writer.

Lupestripe discovered the fandom on 19 December 2006.

Lupestripe is a member of the NorthernFurs, and when he resided in Middlesbrough[1] he organised the Newcastle Meets. He did this from December 2007 to January 2010.[2] Starting from 2008 he has organised an annual 'Tea Shop Crawl' taking place in York, revolving around the idea of having tea and food at different venues across the city as opposed to a pub crawl. Since becoming part of the furry fandom he has attended a number of furry conventions. Not only that, He had been running the LeedsFur Meet with his partner Wolfie since 2007.

Lupestripe has travelled around world as either leisure or as part of his business commitments. He has used these opportunities to make friends and gain a wider understanding of culture in foreign furry communities including those in Finland, Portugal, Denmark, Germany, Hungary, Norway, Thailand, Malaysia and Singapore[3].

A prolific fan of football, he is a renowned Middlesbrough F.C. supporter among football furs. Lupestripe moderates the FootballFurs LiveJournal group.

Lupestripe enjoys writing, both as a hobby and as part of his living. He has contributed short stories to a number of conbooks.

Lupestripe's fursona is a grey-coloured husky with white fur around his stomach. He has an unhealthy obsession with bright pink fur dye and sports a mohawk.