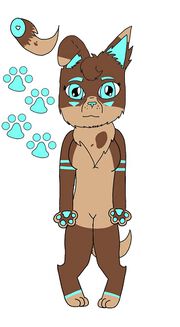 She loves drawing, story writing and making fursuits. She loves loves to eat Pocky, Doritos, mango and sweets. Her favourite drink is Coca-Cola. Her favourite outdoor activity is fursuiting.

In 2017, she discovered the fandom through the Internet and she felt a connection to anthro animals. Secondly, she loves to draw anthro animals arts.

Lune Sparkles is main fursona and it is female. Lune Sprakles's older name used to be Lune Floof. The species is a fennec dog hybrid. The fursona's relationship is single.

Apollo is second fursona and it is male. The species is a wolf dutch angel dragon hybrid. The fursona's realationship is taken. His girlfriend is Skye.

Lune owns a various of fursuits.

The channel was created on November 13, 2016. On April 27, 2017, Lune uploaded Animation TEST her first video on this channel. She usually uploads animations made by herself to this channel.

On December 15, 2019, Lune uploaded Předvánoční outing Ostrava 2019 her first video that featured documentary about her second furmeet that created by her in Czech Republic on this channel.