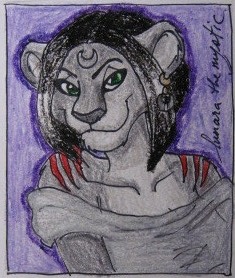 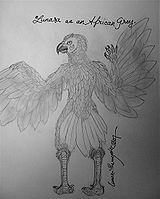 Lunara Lioness is the main fursona and animal spirit of furry artist and fursuiter Ruth Wilson.

Found in 2004, Lunara is often portrayed as a shaman or mystic, practicing ancient, nature-centric spiritual rites. She is influenced by Wicca as well as Native American spirituality.

Lunara attends conventions and furmeets, portraying her fursona with ears and a tail.

From October, 2007, Lunara has also had a secondary fursona, a Congo African Grey Parrot with whom Lunara also feels a spiritual connection. Lunara also uses the character Fitzroy Fox.

Lunara is an artist trained in traditional media, her favourite tools being pencils, charcoal, chalk and oil pastels, crayons, and acrylic paint.

Although her favourite topics of rendering are Furry and Anthropomorphic art, she renders other subject matter as well.