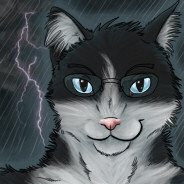 DJ Pirtu (Ville Pirttimäki; born 1984) is a Finnish furry artist whose fursona is a black and white cat. His name derives from pirtu, a Finnish word referring to a liquid with high concentration (95-96 vol-%[1]) of ethanol.

DJ Pirtu is a long-time fan of the webcomic Jack.

More often than not, while role-playing, DJ Pirtu adopts the character of Lumus, who is either a human or a light brown feline character, with red stripes and hair. He is consistently a weaponsmith or something equivalent, always smiling and often possessing crossed eyes. His mental stability is also often questionable.

In Talla'doon MUCK, Lumus was a werecat. As a weaponsmith character, he was soon promoted as a builder, to provide the players with their original and often bizzare weapons. Later on, not too long before the death of the MUCK, he was promoted to moderator.