Ludwig (in full Ludwig T. Dolphin; born June 22, 1981)[1] is a babyfur who lives in Orlando, Florida, U.S.A.[1] His fursona is an undead cybernetic dolphin with a hot temper. 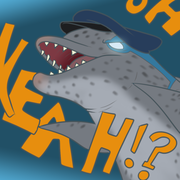 He created the now defunct IRC channel #babyfur on Furnet. After being K-Lined from IRC in 2009, he became active on Anthrochat instead, creating and moderating several channels there. His current channel is #bfd, the successor to #babyfur.