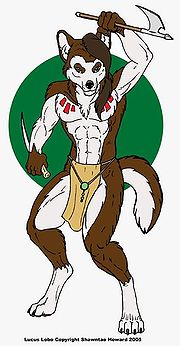 Lucus Lobo (also known as Warwolf) is a character in Extinctioners.

Lucus Lobo, the Warwolf. First appeared in Extinctioners vol.2 issue 7. Lucus is a Dragon Rider and the leader of the warwolf clan in the Garden of Eden. As a warwolf, he has the ability to change forms from a humanoid wolf form (seen in the image), or a normal four legged wolf form. Lucus had to fight his brother Jeran for Alpha of the clan. Jeran, who had betrayed his clan and family had his father and mother imprisoned so that he could become clan Alpha and gain the power that comes along with the position, but Lucus defeated him in one on one combat.

As Alpha, a warwolf gains the ability to take one more form, a hyper-werewolf like form that is much bigger and stronger form.

Lucas is the Dragon Rider Partner of Dre. He also has a deep crush on Scarlet. During their adventure in the garden, he rescued her and found he had fallen in love with her, but her commitment to Red kept their relationship to a simple kiss, though he still holds out hope that someday...