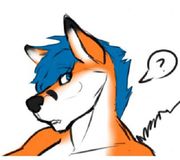 In April 2020, Kruger left the fandom to focus on something else in life, stating that the fandom was just a "teenage phase" and "a 2010's thing", not considering himself a furry anymore.[1]

After joining the furry community, Kruger created two new fursonas, a red dragon named Iggnitus, and a wolf named Mason. On March 12, 2013, Kruger changed the wolf character species to that of a fox called Mason S. Fox, followed up with another red dragon fursona named Felixx N. Daimian on February 14, 2014.

Kruger is an avid video gamer, started playing bass guitar at the age of 12, and electric guitar when He was 13 years old.