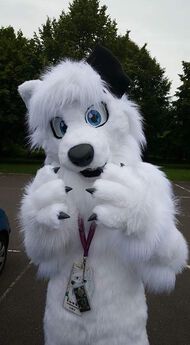 Photograph of LuckyLiolf at his first meet in fursuit.
LuckyLiolf (born June 16, 1992) is a furry who lives in Basingstoke, Hampshire, England.

Lucky in his Cockatoo form. Art by SpeccyChicken.

Sometime in 2019, Lucky also revealed another fursona, a Citron-Crested Cockatoo that also goes by the name of Lucky.[1]

Lucky's fursona is a white Liolf (lion-wolf hybrid) with blue eyes, black paw-pads and nose, and no other distinguishing features. Some photos show him wearing a blue bow in his mane. As a hybrid, he shares the mane, tail and large paws of a lion with the body shape, face structure and ears of a wolf.

His FurAffinity refers to his many interests, including Airsoft, gaming, reading and playing Pokemon GO.

Lucky occasionally refers to himself as the 'Wispa Slut', referring to his adoration of the British aerated chocolate confectionery of the same name.

LuckyLiolf's fursuit was created by Kerijiano of Snow Gryphon Suits.

He is a member of the registration team at Furcation, a furry holiday event in the UK.

He banters infrequently with the Twitter accounts of Furcation, referring to his enjoyment of Earl Grey tea with milk.[4]