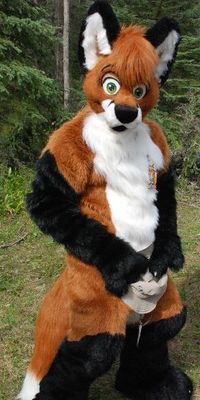 An adorable shot of Lucifur at Furthest North 2009

Lucifur Fox is a Canadian furry who resides in Alberta. He is an active member and ex-Mod of Alberta Furries, and attends most local conventions and meets when possible. He has organized several events for the Alberta furry community, and hopes to continue to do so for a long time. He has been in a closed relationship with Dezu Keti [1] since June 2009. 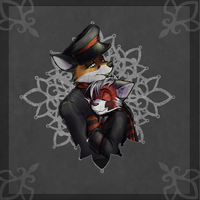 Lucifur met Dezu during a very rough time in his life back in April 2009 at a local furry meet. He was a little tipsy and was making a (lovable) ass of himself, so after only 15 minutes of having known Dezu, he literary swept her off her feet and ran around a little. After some laughs they exchanged e-mails. Over the next 3 months they spent a lot of time with each other. After much discussion, they decided to start dating. They both have never been happier.

Lucifur's fursona came into existence in 2001 for a forgotten reason. He got his name from the feline character "Lucifer" from Disney's Cinderella. Lucifur is a dark orange fox, though sometimes he is depicted as a red fox. He is a switch by nature, playing both sides of the sub/dom spectrum. Though on average he is more dominant.

Lucifer' fursona is also featured in the artwork he commissions. His commissions are rated from G-X and they can be seen on his Fur Affinity account.

As of May 2010 Lucifur Fox has attended:

Lucifur's fursuit was made by Furrhappens in 2009. The suit debuted at RainFurrest 2009. You can see tons of pics of his suit on his fursuit Fur Affinity account

In real life Lucifur is a computer sales consultant. He enjoys working on cars, gaming on his computer and hanging with his friends.