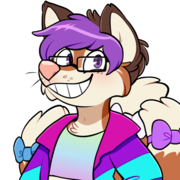 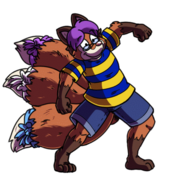 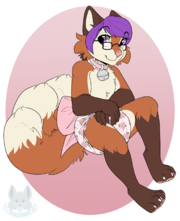 Luca is working as a prep cook at a local hospital, she is an Eagle Scout, and holds a Bachelors of Science degree in Culinary Management. And in late 2018, realized after nearly a decade of considering herself as a girl in general, that she's transgender, and started Hormone replacement therapy (HRT) in April 2019.

Luca started out her involvement within the fandom by joining Furcadia in 2002 as an otter. Over the years her fursonas' species has changed as follows (in chronological order) otter, rabbit, fox, and currently is a three-tailed kitsune.

She is most known for her appearance in the flash animations High Tail Hall and The Penthouse. As well as being a longtime member of the babyfur community. As well as being terminally online on Twitter. And for being a fox on the internet.

Luca's first furry convention was Anthrocon 2006, and she has attended Anthrocon ever since. For several years she was a volunteer, and as of 2017, she was asked to be part of the Programming Staff for the Gaming Rooms.

Luca has gone through several redesigns throughout the years. Once an idealized waif, before shifting more towards realistic proportions based on her real life self. She is a kitsune of nebulous magical ability and origin. See the attached reference for exciting fun facts!