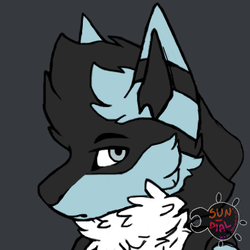 Lu, drawn by Sun-Dial and Lu

He has been in the fandom since April 5th, 2012. His sona is a Lucario named after himself.

Lu's fursona is a Lucario with noticeable differences compared to a regular Lucario. Starting from the head, he has overgrown fur at top which would be considered his hair and his ears have a stripe going horizontal from the middle. His eyes aren't the normal red, instead it is silver with a blue hue and the torso fur is naturally white compared to the normal cream color fur. Another difference is the round spikes, Lu can retract them into a flatten state, which is highly unusual, but he seems to prefer it that way as he is seen with them closed. He is way above natural growth from his species, as he is 6'2" in height and weighing around 180.0 lbs. Lu lives in Japan with Kanna and is in a relationship with her. He is shown to be very loyal to her, like a dog or a Pokemon is to a trainer, rarely seen without Kanna by his side.[1]